Music festivals. Where the love for great music and design collides.

Aside from outstanding lineup of artists and unique live performances, music festivals have also become an occasion to bring out the best creative talents to create buzz, mainly through posters and flyers. Music festivals, especially the ones held outdoors, are not just a celebration of the best of the music world but are steadily becoming a platform for radical self-expression. Though no one really goes to a music festival because of the poster, a good poster sets the perfect tone for the event. Below are some examples of compelling poster designs that caught our attention.

(In case you're wondering, Overnight Prints offers up to 75% off of any of your printing needs. More discounts and deals are just a few clicks away!) 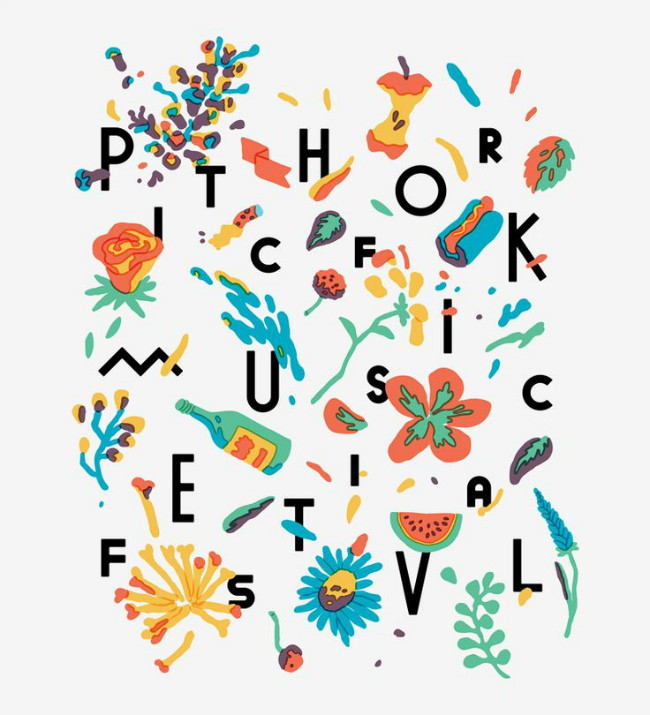 Pitchfork Music Festival 2013. Pitchfork is a 3-day music festival held in Chicago’s Union Park. Since 2006, it has become one of the most celebrated music festival in the US, showcasing over 40 bands and artists with matching affordable ticket prices. This poster from 2013 features flat and clean design and youthful elements to it, and just perfectly depicts what Pitchfork is about. 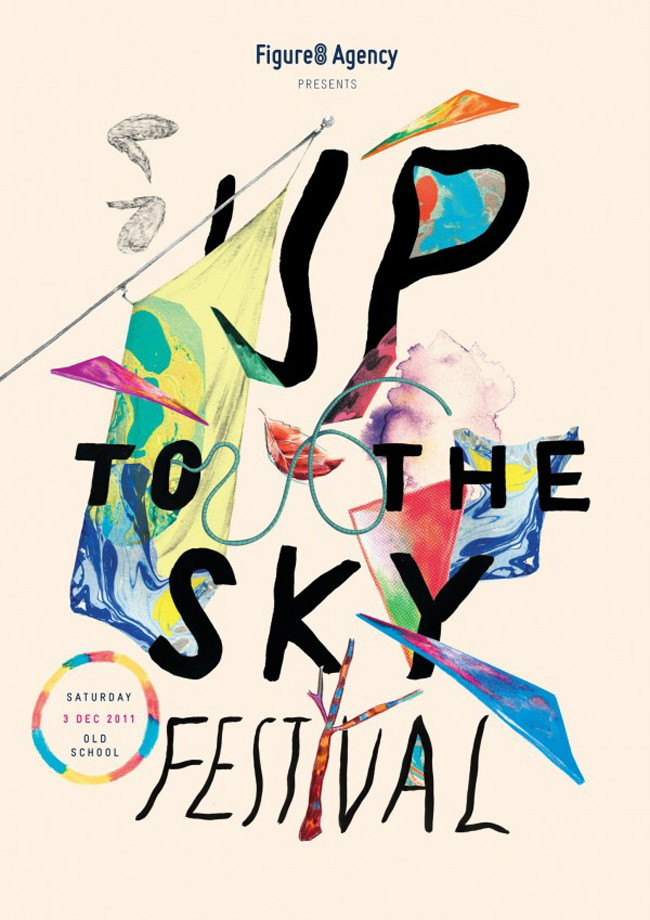 Up To The Sky Festival 2011. Presented by Figure8 Agency, Up To The Sky Festival is a music and video festival featuring indie artists. Figure8 Agency is a company based in Singapore that pushes and promotes the music scene in Asia by producing indie events in Singapore, Malaysia and Indonesia. No further information is available as to who created the poster, but we consider this poster noteworthy. The brushed typeface and seemingly accidental blending of colors on geometric objects create an artwork - a perfect coherence of colors and shapes, reflective of what the event aims to be. 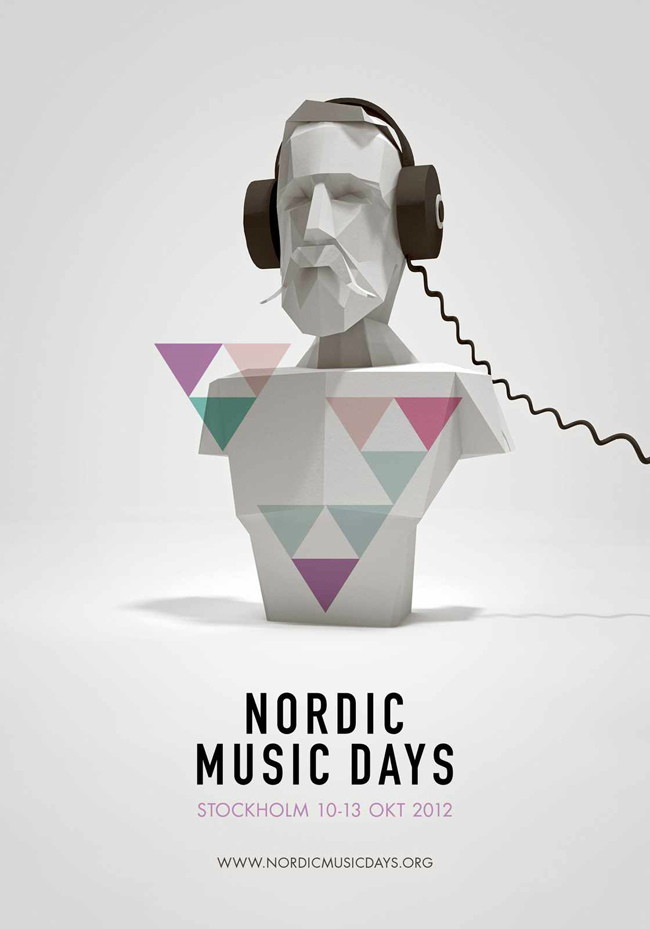 Nordic Music Days 2012. Geometric shapes, subdued hues, minimalist elements – these are what make up this poster from Nordic Music Days in 2012. Nordic Music Days, according to its website, is one of the oldest music festivals in the world. Established in 1888, it is run and managed by the National Composers Council. It is also a platform for international artists and ensembles, and national composers societies from various Nordic regions arrange it.

This poster is part of a collection made by A Perfect World, an advertising agency based in Stockholm, Sweden. Each of the design is based on the four venues in which the music festival will be held – Musikaliska Concert Hall (built by King Oscar II), Slussen (famous for herring), The Halwyl Museum (famous for feather dust collection), Moderna Museet (famous for Duchamp Urinal). 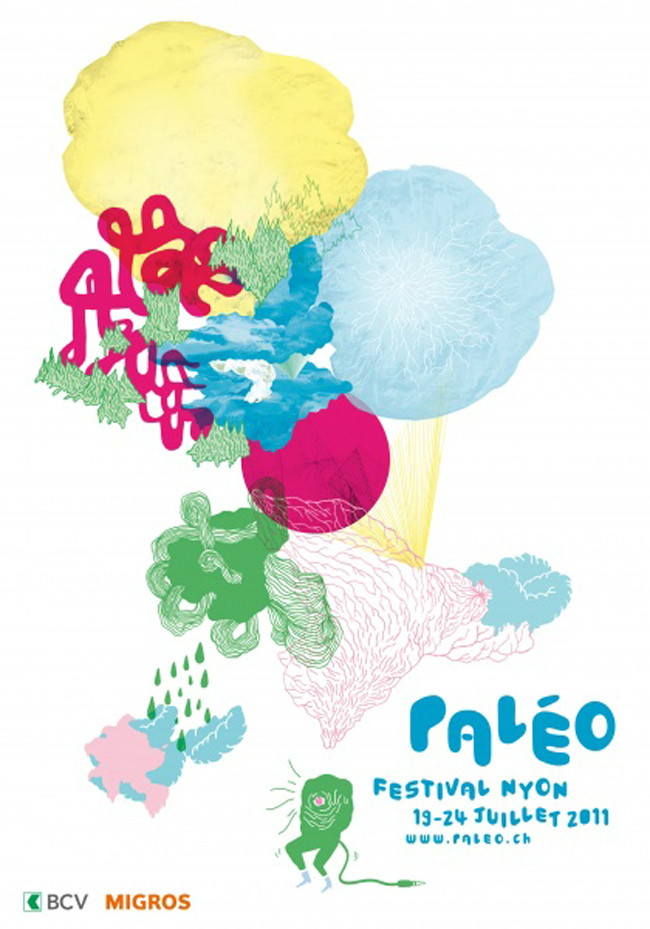 Paleo Festival 2011. Over 250 concerts and shows. Over 230,000 members of the public. All these filling up the 84-hectare Asse site in Nyon, Switzerland since Paleo Festival's founding in 1976. Paleo is an annual music festival held in Nyon, Switzerland, initially named as Nyon Folk Festival, and is now considered as one of the biggest open-air music festivals in the world. The music festival also holds an annual competition seeking the best poster design that they will be using for the event. For 2011, Kyoungmi Kim's design won. During that time, Kim was a graphic artist and a third year student of Geneva High School for Art and Design. When asked about her design, she told the press “I didn’t want to go the way of over-serious abstract graphics. It seemed important to highlight the festive dimension of the event.” 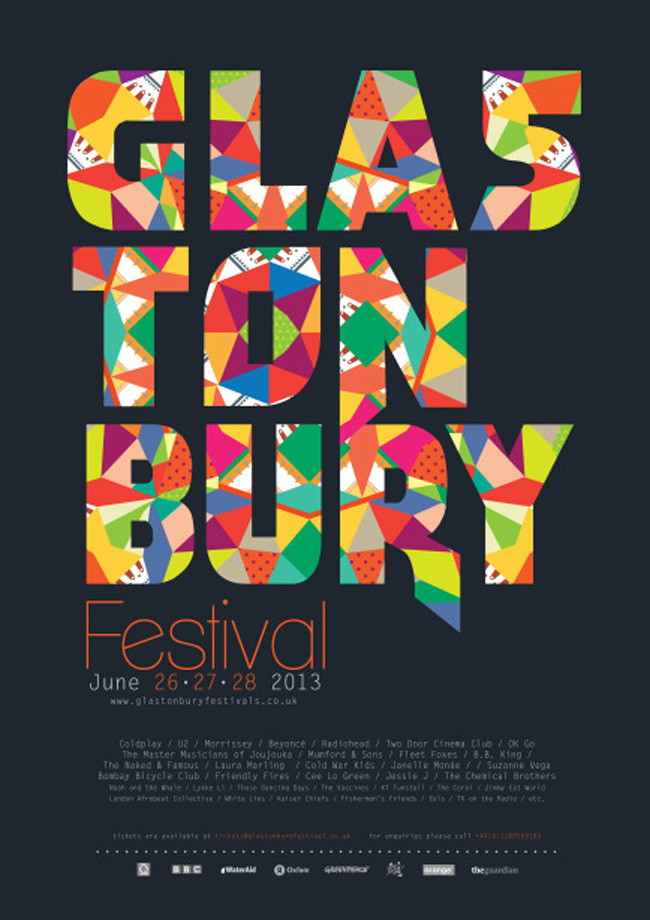 Glastonbury Festival 2013. This is not the 2013 poster for Glastonbury, but it wouldn't be surprising if it is. This poster was in fact made by a Thailand-based designer/illustrator Terri Phathanathong. She made this Kaleidoscope-inspired design minus the unnecessary clutter as an assignment for her design class. Beautifully made and flawlessly executed, it could have easily passed off as the official festival poster. 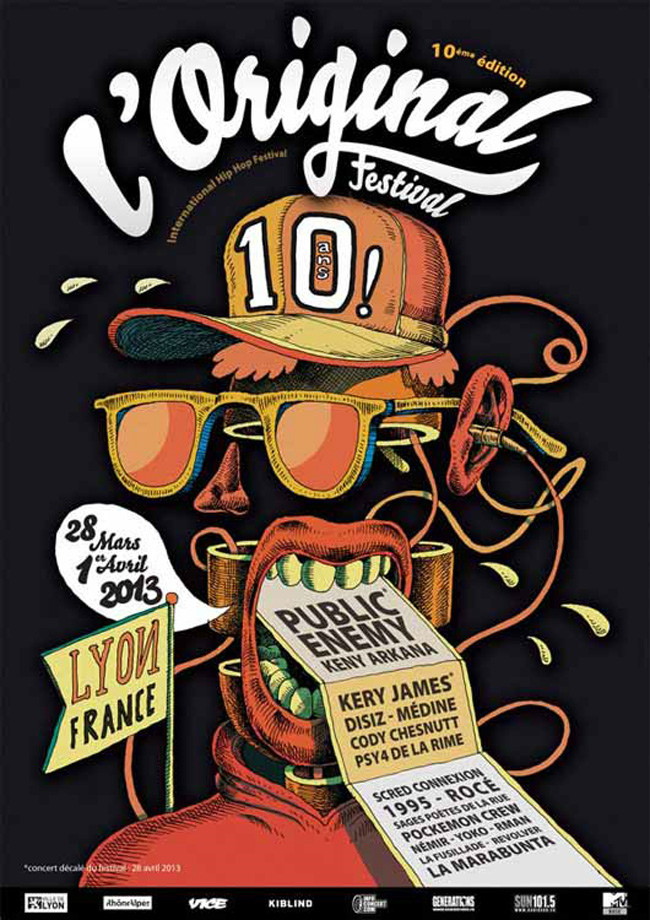 L’Original Hiphop Festival 2013. This multi-day global celebration of hiphop music and culture is held annually in Lyon, France. L'Original Hiphop Festival might have found its roots in France but it welcomes local and international hiphop artists to perform. For 2013, this poster illustrated by Olivier Bonhomme and designed by Arnauld Pottier was on public display in celebration of the festival's 10th year anniversary. 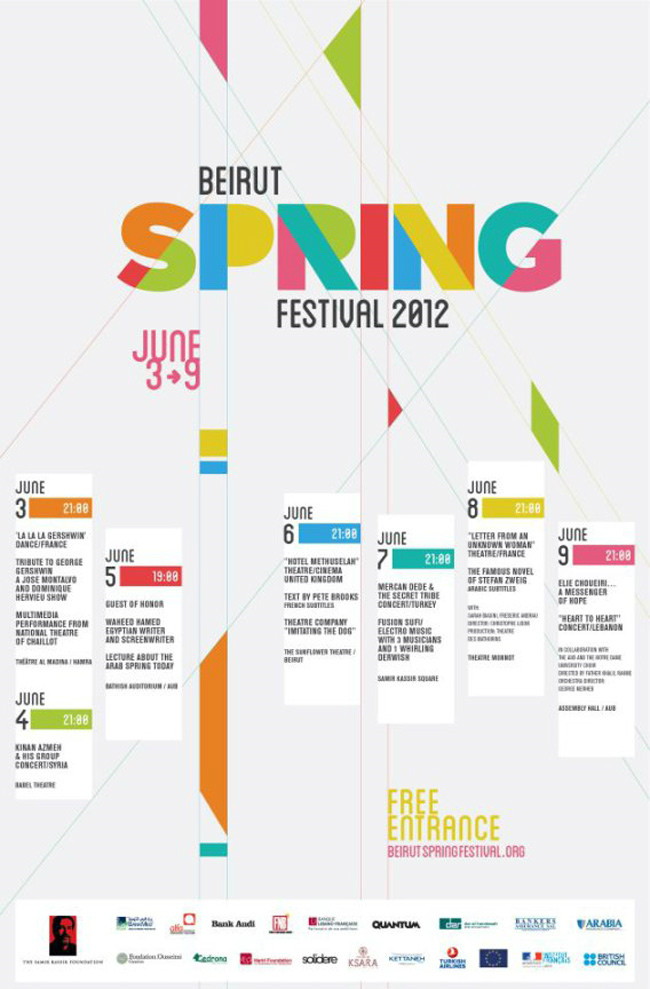 Beirut Spring Festival 2012. Beirut Spring Festival features multidisciplinary performance, from theatrical arts to dance to music. Held in the capital city of Lebanon, the festival celebrates cultural diversity and also commemorates the 7th anniversary of the assassination of the Lebanese press’ martyr. The festival offers entrance to the public for free, and this artwork is their official poster and program for 2012. 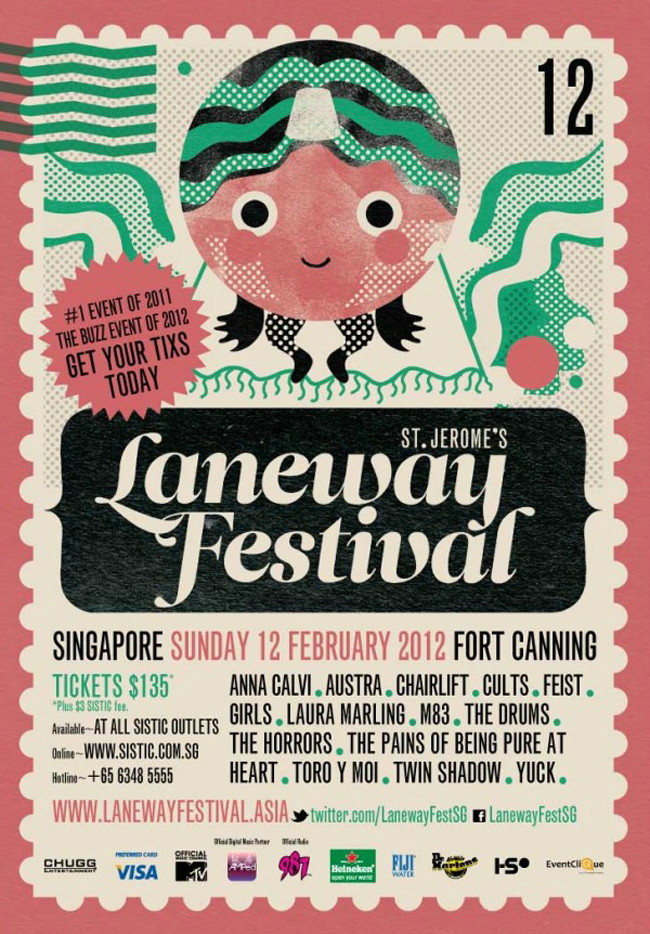 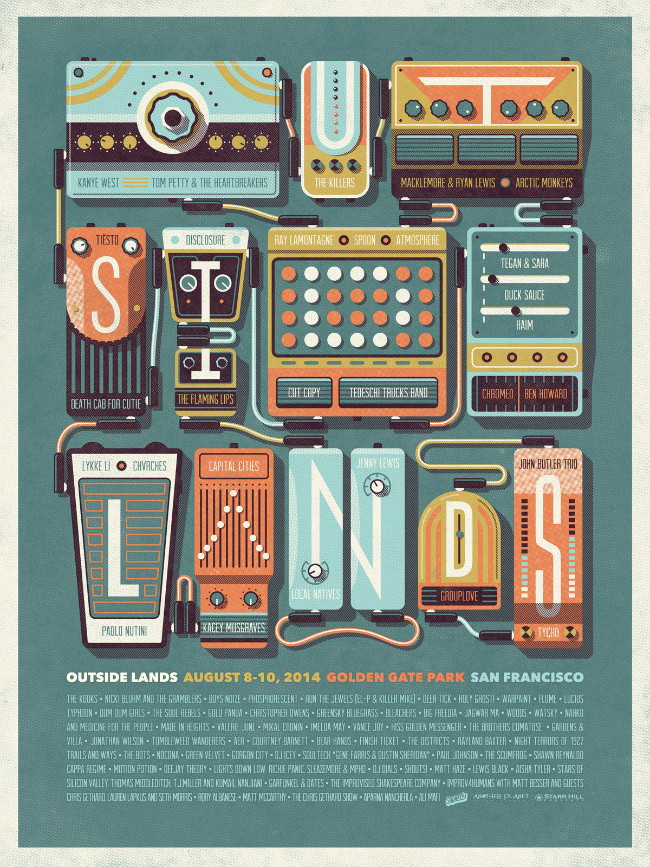 Outside Lands 2014. Outside Lands Music and Arts Festival is an annual musical celebration held by the Golden Gate Park in San Francisco, California, boasting of an impressive artistic lineup. For the official event poster, DKNG Studios took inspiration from the major bands and guitarists that will be performing for the festival, playfully using typefaces to spell out Outside Lands and showcasing the names of the event's featured artists across the design.

Music festivals steadily built their reputation over time as "the event to be" and is seen by the youth as something they should include in their bucket lists. Expect to see more of innovative poster designs for festivals soon.